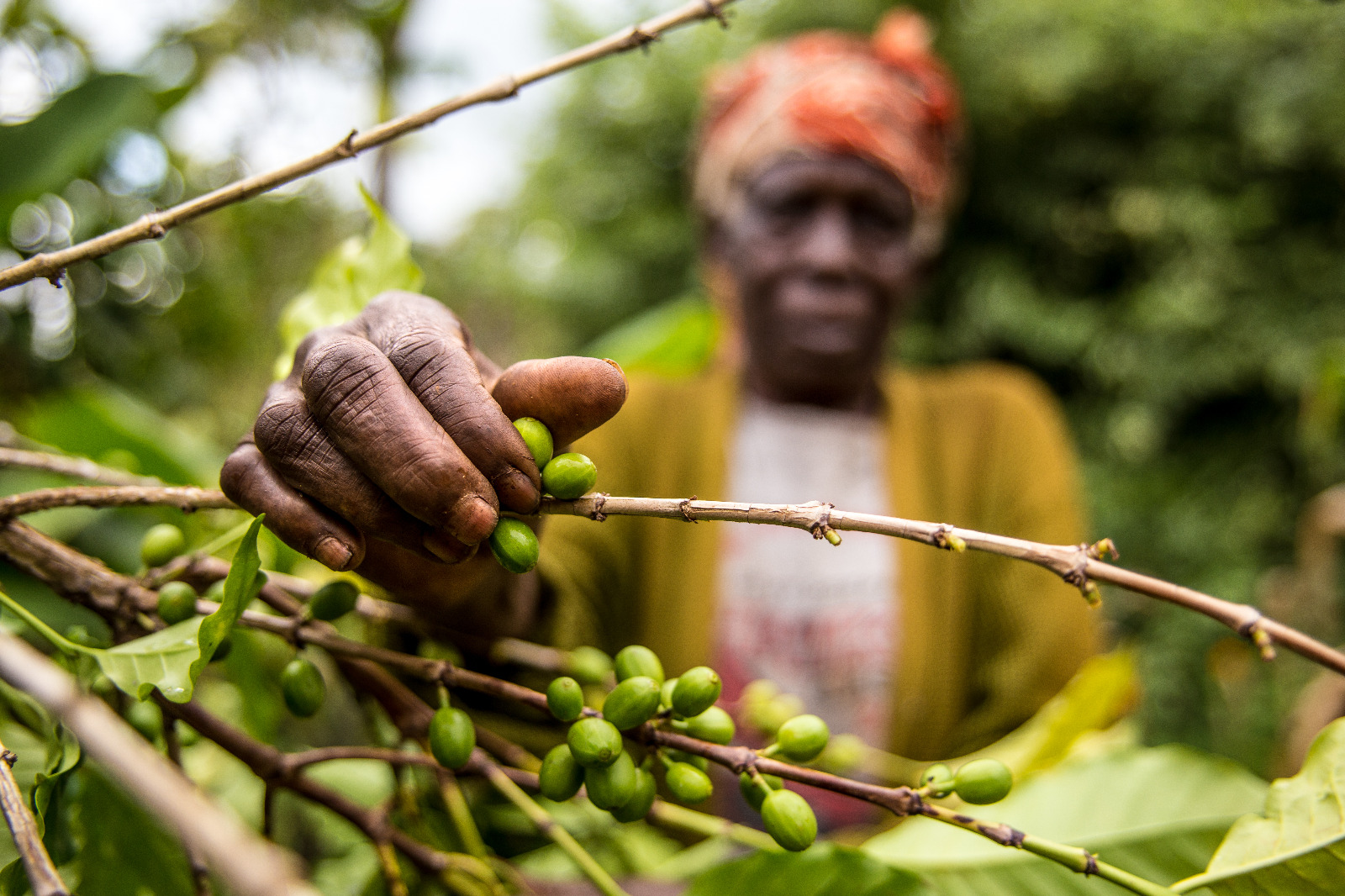 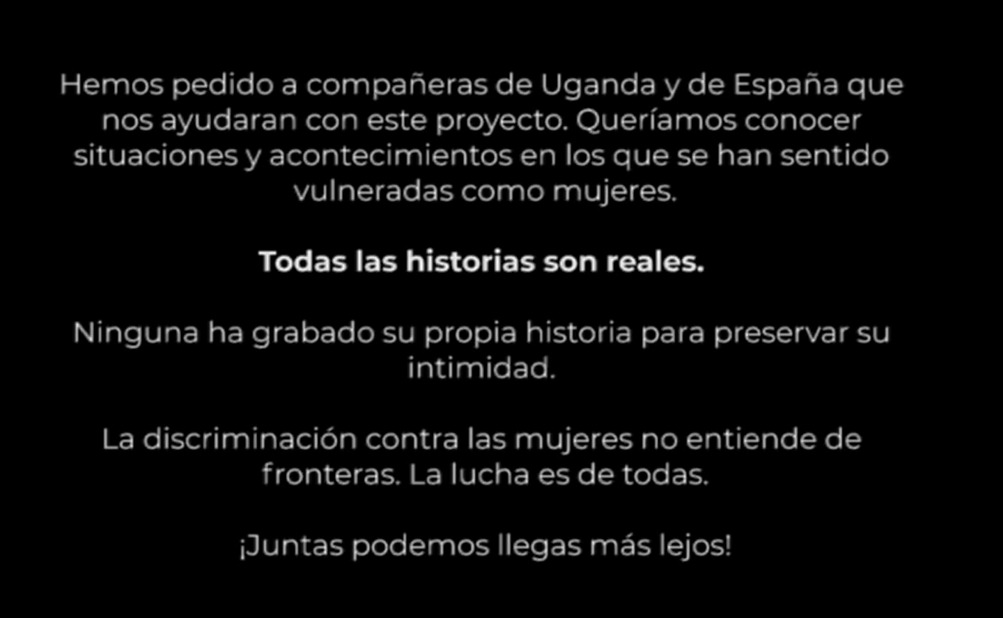 During these last weeks, women from Uganda and Spain have shared with us experiences and situations in which they have felt violated as women. Their stories remind us that discrimination against women does not understand borders and that oppression exists in very different spheres. To remind ourselves that there’s still a road ahead, we want to share the stories of three of them. We must continue sowing equality to make this world a better place.

Violence against women is on the increase despite the presence of laws and policies to protect victims and survivors. Despite the many right violations that women go through every day in life I want to write about the sexual harassment and discrimination at work places.

At my first job after graduating from the university, I suffered a series of sexual harassment by male “boss”, a man old enough to be my father. He kept up putting up sexual advances that threatened me in to thinking that if I didn’t sleep with him, I would lose the job. I worked with a team of four young men and I was the only woman in the team. I remember my boss calling me one day to his office and he told me “you are not even befitting to be in that position, you should count yourself lucky to be there”. At that moment I was timid to answer back at him, I only closed his door behind me and moved out of his office. This really blew my mind because I totally failed to understand what he meant by that statement. One thing I knew is that I was on that Job on merit. It was after some time that I realized what this man really meant by that statement. I remember he had a secretary that he would yell at and talk to the way he wanted without any bit of respect. He had put her in a state of fear of him that even when she talked to him, she would not even look into his eyes. It was then that I realized the kind of man he was, the one who treats woman as a no body.

He did not stop with his vexing character; he would wink his eyes to me during meetings and also making fun of me during meetings. I knew what he was doing was wrong but who would I report to at that time and how would I even start to report. That was the fear that I had in me. I realized that this would not stop I would not be comfortable working with this boss and so I left the job.

I then tried to apply for a job in some other place. After the oral interview, one of the male panel members contacted me one evening for a carpet interview. At one moment I stopped and though what does he mean by a carpet interview, so I boldly asked him what he meant by a carpet interview. He arrogantly answered back to me and said, “You are a big girl who are much able to understand what I mean”. I sat and thought over what he told me, I realized that if am to do it I will have to do it continuously to maintain the job. So immediately I called him and told him: “Sir am sorry but I will not be able to come for the carpet interview” and then I dropped the line.

My experience has taught me to say NO, NO matter the situation, NO matter the Person and NO matter what am threatened with. It is a time for women to become powerful and stand up for themselves and say not to sexual violence,” NO MATTER WHAT”.

Cases of violence among women continue escalating in Ugandan communities and sometimes are catastrophic ranging from the types of violence women go through; these variations are not limited to the following: physical abuse, emotional abuse, sexual abuse, financial abuse.

Violence against women is still a stain spot in Ugandan communities, generally derailing women empowerment, access to resources and attainment of desirable livelihood

This inspires me to write a story about my experience in violence.

I started to experience violence from the very first time I started living with the father of my son and his mother in the same home, I was emotionally abused, tortured psychologically, rejected, hated, and discriminated by my mother-in-law. This marked the beginning of destruction of myself worth.

I painfully lived with my mother in law who completely didn’t like me and said I was not the best choice of a woman for her son, she persistently insulted me, verbally abused me,, harassed me, denied me food in most occasions especially when I was expectant, I went hungry for several days because I could not afford a meal, this brought frustration in my life because I felt completely useless especially when the father of my son could not help the situation, I finally had no choice but to leave the home, I gave birth a few months later to a bouncing baby boy.

I studied in mixed school and, on many occasions, faced discrimination by the teacher and boys in primary and secondary. In primary six I became my class’ number one followed by two other girls in second and third position. On the day of getting reports the class teacher on the assembly was bitter on boys asking them why they left the girls to win and promised to punish them for their stupidity that sounded like though both girls are boys were taught together the boys were meant to be superior.

After I graduated as a teacher from the university to teach religious education and history in secondary school advanced level I applied for a job in private school. The director of the school offered me the job but to teach in ordinary but not advanced level as per my qualifications a male applicant was given to teach in my position and he did not have the qualifications. All because he was male with a big voice, big in size so the students in upper secondary would fear him as compared to me a female and small bodied lady.

Another reason was that as a lady I would get pregnant and ask for maternity leave and the students will miss out some lessons, therefore he opted to have a male teacher for upper classes. I took on the job but after two months he realized the male teacher was not performing well and he approached me to ask for help in doing the lesson plans and schemes of work, setting tests, etc. I did all this, but for the same pay, still less than colleague who would earn more money than me despite the fact that I was doing the biggest part of his job and I was more qualified than him. I had degree in education and he had a diploma. When I talked to the director of the school about salary increment, he told me the money I was earning was enough for me because I was a woman and I couldn’t be paid like my other male teachers. Some of his reasons where that I had no bigger needs to use that money for compared to my male workmates. I left the job after a year.

When I started an organization, I was faced with a lot of challenges with a male workmate who even went to the district and told the officials not to register the organization to implement activities in the district simply because it was led by “mukazi bukazi” literally meaning a mere woman.

Thank you to all the women who have shared their experieces with us. Together we can go further!

Petits Detalls is a feminist organization. We work everyday to achive gender equality.

This website uses cookies so that we can provide you with the best user experience possible. Cookie information is stored in your browser and performs functions such as recognising you when you return to our website and helping our team to understand which sections of the website you find most interesting and useful.

You can adjust all of your cookie settings by navigating the tabs on the left hand side.

Strictly Necessary Cookie should be enabled at all times so that we can save your preferences for cookie settings.

If you disable this cookie, we will not be able to save your preferences. This means that every time you visit this website you will need to enable or disable cookies again.